Who can give kids hope? The Candy Man can 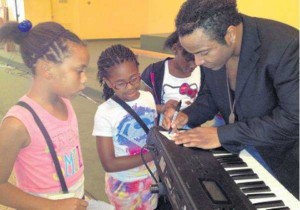 published in the Belleville News Democrat by Teri Maddox, September 22, 2013

But they whooped and hollered when impersonator Nicholas Brooks sang Sammy’s 1972 hit “The Candy Man.”

“That was one of my favorite assemblies ever,” said Christina Burrell, 13, of Fairview Heights. “I want to be in showbiz, and he gave me pointers on how to be myself and stick with it.”

Nicholas, 33, of Las Vegas, returned to his old neighborhood to encourage children to follow their dreams.

CLICK HERE TO READ THE REST OF THIS ARTICLE